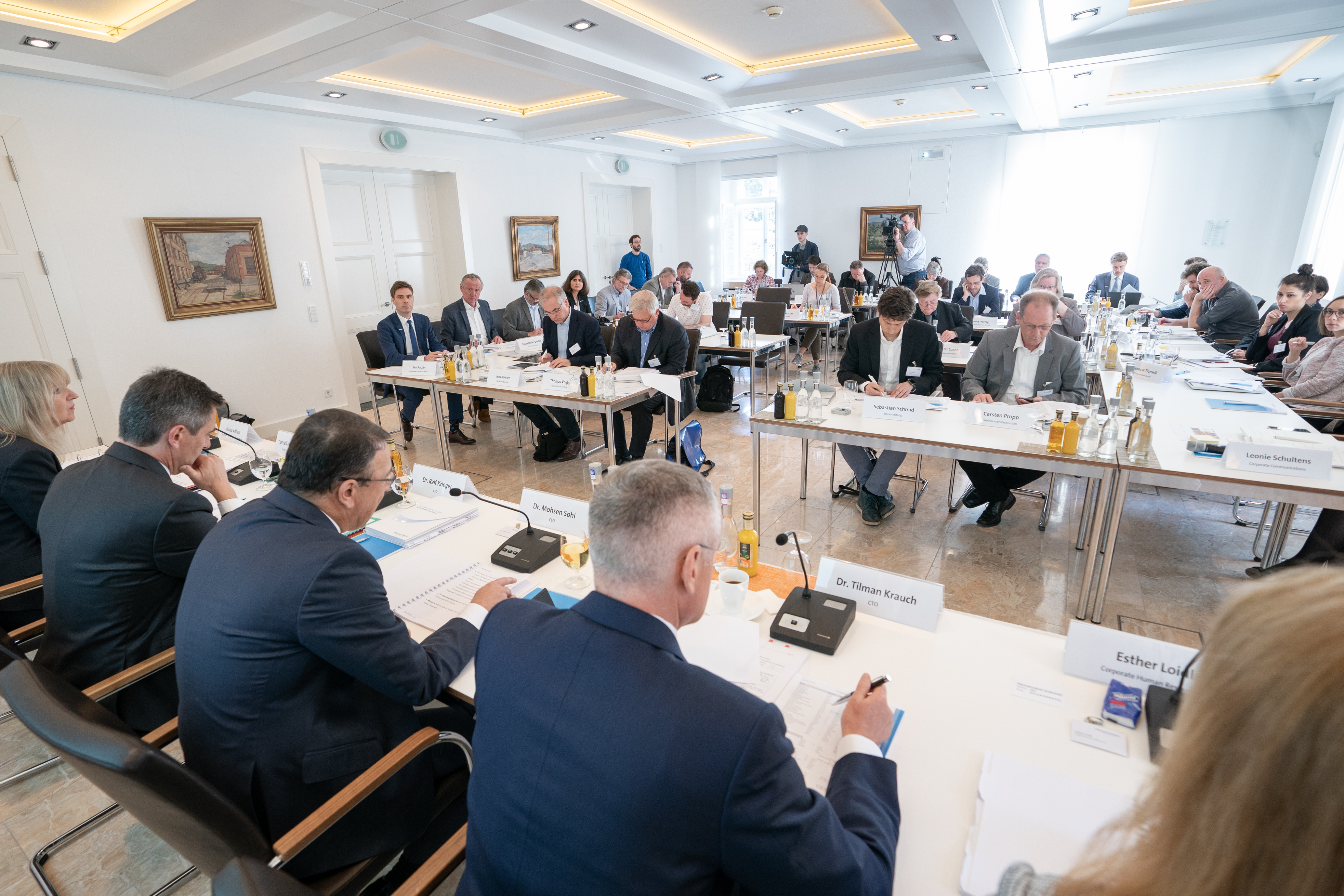 The worldwide technology group Freudenberg has continued its good business development despite challenging economic conditions. In 2017, Freudenberg boosted sales to €9,345.6 million (previous year: €7,900.1 million) on the basis of IFRS (with consolidation of joint ventures at equity), representing a rise of €1,445.5 million or 18.3 percent over the previous year. Adjusted for the effects of acquisitions and disinvestments (€1,283.1 million) and exchange rate effects (€-159.7 million), sales grew by about 4 percent or €322.1 million compared with the previous year. The main acquisition effect was the result of the full acquisition of the Vibracoustic Group in 2016.

The future-oriented nature of the Group is evident from the fact that about one third of sales is earned with products introduced less than four years ago. Consolidated profit ran at €700.1 million (adjusted value for previous year: €519.0 million following the elimination of a special effect from the change in status of the Vibracoustic Group; including the special effect, the consolidated profit for 2016 was €1,086.9 million).

“Both operationally and strategically, 2017 was a successful year for Freudenberg,” said Dr. Mohsen Sohi, CEO of the Freudenberg Group, at the annual press conference held in Weinheim on Tuesday. “We are well on our way to being one of the most innovative and efficient technology companies.”

In contrast to previous years, Freudenberg no longer reports on the basis of pro-rata consolidation but solely on the basis of values determined in accordance with IFRS. Under these reporting standards, joint ventures are included in the consolidated financial statements by the equity method as a general principle. The sales and workforce figures of these companies are not taken into consideration. Especially following the full acquisition of the Vibracoustic Group in 2016, the difference between pro-rata consolidation and the equity consolidation of joint ventures has become insignificant.

Profit from operations (EBIT) in 2017 amounted to €797.6 million (previous year: €677.5 million; with special effect: €1,245.4 million). “Our sustained high earnings power is a result of the consistent action taken to improve productivity and efficiency,” Dr. Sohi underscored.

The investments included the following projects, among others:

Equity development
The equity ratio rose from 45.0 percent to 47.4 percent. In absolute terms, equity increased by about €232 million, mainly as a result of the profit reported. With this equity ratio, Freudenberg continues to hold a very good, comfortable equity base. The rating agency Moody’s Deutschland GmbH, Frankfurt am Main, confirmed its credit rating of Freudenberg SE, Weinheim, at A3, with a stable outlook. The Group therefore continues to hold a single A rating.

Innovation
Innovation is the key to long-term corporate success. During the year under review, Freudenberg invested more than ever before in innovation and conducted research and development activities in the amount of €427.8 million (previous year: €335.1 million, +27.6 percent). This corresponds to 4.6 percent of sales (previous year: 4.2 percent). The objective of all activities is to further increase the share of new products in sales. The share of products less than four years old reached 33.0 percent (previous year: 28.7 percent). During the year under review, an average of 3,445 employees (previous year: 2,751 employees) were employed in research and development. Once again, the main regional focus was on Germany, with 1,662 employees.

Operational Excellence
In the 2017 financial year, the administrative expenses ratio fell from 7.6 percent to 6.7 percent both as a result of the lower cost structure of the Vibracoustic Group, consolidated for the full year for the first time, and as a result of efficiency improvements such as process and system optimizations. “Through these efficiency improvements, we are creating the financial leeway we need for continued investment in new products and technologies for our customers and for safeguarding the long-term future of Freudenberg,” said Dr. Krieger.

Portfolio
Freudenberg is developing its portfolio selectively and in a focused way through acquisitions in all Business Groups. The objective is a balanced portfolio of cyclical and anti-cyclical business with equal sales contributions from the Americas, Europe and Asia. Examples of acquisitions in 2017 were:

Human resources
In its pursuit of excellence, Freudenberg further expanded its talent management. One goal is to foster diversity and inclusion within the company in order to recruit and retain the best employees.

In 2017, 138 young people began their training with Freudenberg’s German companies. In total, 394 apprentices and students were working for Freudenberg in Germany as at December 31, 2017.

Responsibility for society
As a values-oriented, family-owned technology group, success for Freudenberg is not merely defined in terms of financial success, but also always goes hand-in-hand with taking responsibility for society. These two goals have been inseparably linked since the foundation of the company. Sustainability, Occupational health, safety and environmental protection (HSE), Corpo-rate Citizenship, Compliance, Human Rights & Labor are anchored in Freudenberg’s values and principles.

Sustainability
In 2016, Freudenberg developed a Group-wide sustainability strategy, which was then transferred to the Business Groups for implementation in 2017. Furthermore, sustainability has become a systematic component of our strategic planning process.

Sustainability has two dimensions in the company. The first dimension involves organizing processes and utilizing equipment to conserve resources (footprint). The second dimension is the numerous Freudenberg products and solutions that allow customers’ production facilities to be more efficient and sustainable or make their products more resource-efficient (handprint). “By reducing our own footprint and increasing our handprint with the customer, Freudenberg contributes to greater sustainability throughout the world,” Dr. Tilman Krauch, CTO of the Freudenberg Group explains. The six core themes of materials, waste, energy, emissions, water and health are the most important factors for the Group.

Occupational safety
The safety of employees at the workplace is of paramount importance for Freudenberg. In 2017, there was a special focus on occupational safety at all levels of the company. As a result, the negative trend reported for 2016 was reversed and Freudenberg returned to its high standards. In the 2017 financial year, the LDIFR (Lost Day Incident Frequency Rate – this rate measures all incidents at work involving at least one day’s absence per million working hours) was 1.4 (previous year: 1.8).

Corporate Citizenship
For Freudenberg, commitment to Corporate Citizenship goes beyond the value chain. In addition to a number of measures, the objective of the “e²” (education and environment) international program is to give people access to education and work and to encourage environmental protection. Freudenberg is currently making a total of €14 million available over 7 years. From the launch of the initiative in the summer of 2015 up to the end of 2017, funding was approved for a total of 60 projects, from small actions to major education programs in the direct neighborhood of Freudenberg sites.

Conclusion for 2017
“We were able to complete major strategic projects that will be crucial for the long-term success of the Group. All in all, we have become more efficient and more innovative. This is a result of our efforts to reduce administrative expenses at the same time as increasing expenditure on research and development,” said Dr. Sohi.

Current developments in 2018
The Freudenberg Group started the 2018 financial year with a slightly improved order book compared with the previous year. This is attributable to the generally positive market development in most Business Groups in 2017.

In total, Freudenberg plans to initiate investment projects with a total value of about €400 million in 2018. Of this amount, about €100 million are to be invested in tangible assets in Germany, including €35 million in Weinheim.

In the first quarter of 2018, Freudenberg already invested about €90 million in the acquisition of innovative companies or stakes in such companies. Acquisitions included E.D. Oates Pty Ltd, the market leader in the professional cleaning business in Australia, and Hanns Glass GmbH & Co. KG. in Germany, the leading global supplier of floor mats for the automotive industry. Stakes were also acquired in the fuel cell manufacturer Elcore and its affiliate Elcomax in Germany, as well as a minority holding in the US company XaltEnergy, a producer of large lithium ion battery cells, modules and systems.

Outlook for 2018
Freudenberg expects a generally stable macroeconomic environment in the 2018 financial year. While global economic growth in 2018 is likely to be slightly higher than 2017, this is counterbalanced by the persistently challenging geopolitical situation in various regions of Eastern Europe, the Middle East and South America, slower economic growth in China as well as rising raw material prices and higher exchange rate risks.

In addition, new technologies such as electro-mobility and autonomous driving in the automotive sector or cross-sectoral megatrends such as digitalization, connectivity and sustainability call for innovative solutions in a challenging market environment where customer requirements are constantly changing. In light of this, Freudenberg expects overall growth of 1.0 to 3.0 percent for the markets relevant to the Group.

The Freudenberg Group Board of Management (from left to right) Dr. Tilman Krauch, Dr. Mohsen Sohi and Dr. Ralf Krieger during the Annual Report Press Conference.